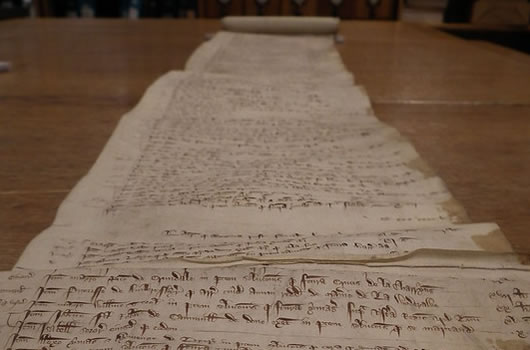 
This important article by Dr A.J. Hibbard was first published in The Court Journal of the Scottish Branch of the Richard III Society, Vol. 26, Autumn 2019.

With grateful thanks to Dr Hibbard and the Journal’s editor, Dr Sandra Pendlington, for their kind permission to publish the article in updated form here.

It is important to understand that very few government records survive that are capable of providing insight into the momentous period of the Protectorate in 1483. Taken together with the other missing records of King Richard’s reign, it looks very much as if a campaign was undertaken during the subsequent reign(s) to destroy any records that might have proven embarrassing to the new Tudor dynasty and their supporters. Here is a list as of July 2019. The list will be updated as needed.

Editor’s Comment: My thanks to AJ for her research. It shows us precisely what the situation is – that it seems there was, sadly, a very deliberate campaign to destroy records.

Dr Hibbard will update the list as her work continues.

Dr A J Hibbard is a retired professor from the University of Wisconsin specialising in transfusion medicine. She has considerable academic experience involving the evaluation of evidence and was introduced to historical research through her 20 year search to identify her late Grandfather. AJ has been researching the life and times of Richard III intensively since the announcement of the identification of King Richard’s remains in 2013 and has been a member of the Richard III Society since then. Her interest in King Richard began following the broadcast of An Age of Kings in the US in about 1962, followed directly by reading Paul Murray Kendall’s acclaimed biography. AJ is an American national.